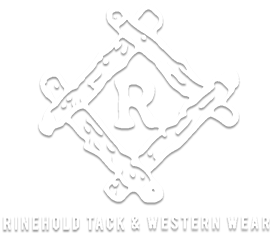 Rinehold Tack & Western Wear was founded by Dale and Jean Rinehold back in 1968. The store began in a small two car garage and has since transformed into a 6,000 square foot retail store that carries boots, jeans, and clothing for the entire family, and tack for horses and livestock. The store is located on the family farm in Waterloo, IN where Jean’s grandparents once resided.

Dale and Jean got their start in the equine industry at an early age. Dale raised and showed horses for the majority of his life. Back in the 1950’s Dale’s family raised many ponies. He himself rode many Quarter Horses and Thoroughbreds at county fairs throughout Indiana, Michigan, and Ohio. While Dale and Jean’s children were still in 4-H, the family kept as many as six to eight Quarter Horse broodmares. As their kids became older, Dale started raising Haflinger Horses and has passed that tradition onto his grandkids.

Dale has since passed away and has left his family a legacy of hard work and a strong commitment to family, community, and customer service.

In May of 2015, Jean’s grandson, Logan Rinehold, took over managing the store, and he has brought Brooke Reas on board.

Both Logan and Brooke are actively involved in the livestock, Quarter Horse, and draft horse industries. Each attended Black Hawk College East Campus in Kewanee, IL and Purdue University in West Lafayette, IN. Brooke was a member of multiple National Champion Horse Judging teams during her time at Black Hawk. Logan was also a member of multiple National Champion Livestock Judging teams during his time at Black Hawk and Purdue.

We certainly appreciate you visiting our website and we look forward to hearing from you soon! As Dale once stated, “We absolutely will not mislead someone – I want them to come in here and handle quality top of the line merchandise at reasonable prices. It’s more than just a business with us.”

Spring Items are starting to roll in!

New items are arriving weekly at the shop! Stop in or check out the New Arrivals tab to see what's just in!